Note: See the end of this post to see how you can get/use my expense tracking spreadsheet (free).

Many people are interested in how much around-the-world (RTW) or other long-term travel costs, especially as a budget traveler or backpacker. As I explained in my Central America cost breakdown, before I began my multi-year Latin America journey, I created a spreadsheet to track my expenses. Believe it or not, I managed to maintain it and now have complete expense data to share with all who might be interested. Now that I have finally left Brazil I can provide the full details for South America.

How I Travel and Other Observations

Any breakdown of this nature deserves some background information, and the value of my particular expenditures tracking will naturally depend on how similar your travel style is to mine. Perhaps the best description of my travel style is comfortable cheap. Whenever possible I try to save costs but I am not on such a tight budget that I will put up with extremely unpleasant or unsafe circumstances just to save a little money. In my previous post I listed many more details, based on the categories I tracked, of how I travel to help you understand my numbers better so read that if you are interested. To recap I will just list the basic ideas here:

Overall, in South America, I spent 669 days and US$20,717 for an average of US$31 per day. These numbers don’t include my trip to Antarctica which I detail later. See the notes for each country to better understand the numbers. 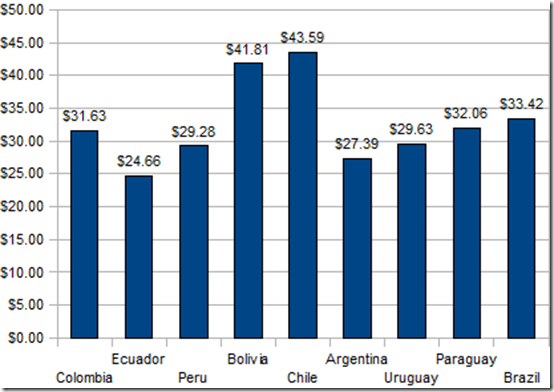 My costs in Colombia were slightly higher than might otherwise be expected because I chose to rent a somewhat expensive room in an apartment in Medellin for a month. Also, I had my camera stolen and had to buy a new one so that added to my overall expenses.

Ecuador ended up being the least expensive country. I had originally hoped to visit the Galapagos islands which certainly would have blown up the budget, but in the end I decided against it as I didn’t want to go in the off-season. My lodging numbers could have been a bit lower if I had stayed in dormitories but as you can see, staying in private rooms was hardly an unreasonable expense. Plus, in some places there really aren’t typical hostel with dorm options. That fact also meant I rarely cooked because there was usually no kitchen but as you can see my food budget wasn’t too bad anyway.

I did more tourist activities in Peru such as sandboarding, the poor man’s Galapagos, Colca Canyon, the Cuzco tourist ticket and, of course, Machu Picchu. None of these expenses were in any way unreasonable. Travel was more than double my Ecuador numbers, partly because buses cost about double and partly because it is a larger country and I was moving around a fair amount. Finally, I bought both a new pair of hiking boots and a simple smart phone in Peru, which drove up the daily average more than five dollars.

Bolivia is generally considered a cheap country, and it certainly can be, but for me you’ll notice it wasn’t so much. That is because I had to pay US$135 for a tourist visa and I did three touristy things that cost some money: bicycling the death road, climbing Huayna Potosi and doing an Amazon tour (worth every penny though each!). Also, I didn’t spend as much time in Bolivia as I would have liked because I knew I had to get down to Ushuaia for my trip to Antarctica before the season ended in March. Note that I purchased a sleeping bag and some extra cold-weather clothes in La Paz which I lumped in the tourism category when I probably should have put them in the miscellaneous category instead.

As you can see, I spent far less time in Chile than in other countries (still rushing to get to Antarctica) and it is a very long country, thus travel costs were my biggest expense. That included one flight from Puerto Montt to Punta Arenas. It cost about 50% more than the bus ride, but saved me 24+ hours of travel time and the need to cross the Chile/Argentina border twice. I switched from private rooms to dormitories in Chile otherwise my lodging numbers would have been much higher. The tourism costs were mostly attributed to my week hiking in Torres del Paine.

There is no point breaking down the expenses for my trip to Antarctica as it was an all-inclusive cruise. I paid $3490 for the cruise and added a $110 tip for a total of $3600. You could (and should) argue that I paid more because I had to stay extra days in Ushuaia while I searched for and then waited for my cruise. Those costs are, instead, bundled in my Argentina numbers. Likewise, you should factor in transportation expenses to get to Ushuaia but, in my case, I would have visited that city regardless.

In Argentina my lodging costs included almost five months renting a room in an apartment in Buenos Aires. Food definitely would have been a bigger expense if I wasn’t cooking for myself so often. Staying for so long, I did buy a cheap used phone (after the one I bought in Lima was pickpocketed on the subway) and I used pre-paid service. Mostly I just used the phone for sending text messages so my costs weren’t significant.

One big point I should make is that Argentina is experiencing very high levels of inflation. For example, when I arrived in Buenos Aires, a pizza at Ugi’s, a chain (not that great, but generally cheap) was AR$14 (and I was told it had just recently increased from AR$12). When I left 5 months later it was AR$21. The government lies about the real level of inflation but it is generally believed to be at least 30% per annum. In theory, if the exchange rate adjusted in step with inflation foreign travelers wouldn’t need to worry so much and my numbers would probably stay more or less accurate but in my experience the exchange rate did not in fact move in proportion to inflation. It was about US$1 = AR$4 when I arrived and when I left it was US$1=AR$4.2 (5% change).

I traveled fast in Uruguay, mostly because the interesting things to see aren’t that numerous and cover a fairly small geographical area (for South America). Also, it was low season and still a bit chilly so the main attractions, the beaches, weren’t really worth extended stays. I mostly ate out and it is reflected in my food costs. My travel costs would have been higher but I was fortunate to make friends with an Argentine guy who was on vacation with his car and we traveled together a bit with him refusing to allow me to pay for any gas.

My Paraguay visit was very short, and confined to Asunción. There were some things I had originally wanted to do but in the end I lost my energy and was anxious to get back to Brazil, especially so I could see some things before the high season began. My average costs were driven significantly higher mostly due to the fact that I had to pay US$100 for the visa. Also, my lodging was higher than it needed to be, but I had a very nice private room which I definitely thought was worth the money. It wasn’t permitted to use the kitchen so I ate out every day for lunch and dinner which drove my food costs up.

One thing you will invariably hear if you talk with other backpackers is that Brazil is expensive. Not expensive like Australia but definitely expensive for South America. My numbers don’t really reflect that, mostly because I spent almost six months in the country and rented a room in an apartment for more than half of that time. Overall I do think things are more expensive in Brazil, especially transportation and dining out (though there are quite a few cheap food options available as well). Brazil is a huge country and, interestingly, the prices vary a lot from one part of the country to another. Generally speaking, the further south you go the more expensive things get. Most of the tourism money I spent was due to the tourist visa I had to purchase (about US$150 for the first time and about US$35 for the renewal).

How I Track My Expenses: Get the Spreadsheet Yourself

As with my Central America breakdown, I tracked all my South America expenses using my custom-built travel expenses tracking spreadsheet. If you’d like a copy for yourself, just click through for the public Google Doc, or if you prefer an Open Office version, just contact me directly and I will be happy to email you a copy. The spreadsheet will automatically convert to US dollars and Euros; it can handle a variable number of days, up to 366 (accounting for a leap year), though there is a smaller one-month worksheet as well for shorter trips; and it will automatically graph your expenses. If you do use it and find any errors please let me know.

Spending Breakdowns Around the Web

In my Central America cost breakdown I listed quite a few similar budget breakdowns from other bloggers that I have come across which you might want to check out. Alternatively, Jodi at Legal Nomads offers a resources page with a good collection broken down by RTW and part of the world.

h J R
Decided to come to Phuket for the first time and got to see the amazing Similan Islands yesterday. #similan #phuket #thailand https://t.co/OJZ2kpEXak

My name is Jeff Blum. I am a digital nomad that has been slow traveling the globe since March 09, 2009 (4,449 days.). Along the way I have learned a few tips that I hope to share with you on this site.